I was reading Paul White’s post about bitmaps in SQL Server and, other than realizing that I basically know nothing about anything (like a Socrate’s epiphany) I wanted to at least see how this good stuff added up in the latest 7 years.
Down with experimenting, we’re doing this LIVE! (Well, it’s live for me, for you it’s still a blog post)

I’ll start by creating two BigInt-only tables and fill it a bunch of numbers, one small and one big, leaving them as heaps for now

Everybody’s thing to do first: Take baseline measurements, I’ll always indicate the CPU and Execution times of the queries as a comment in the code, to better associate each query to its time

As expected the multi-threaded query is faster because it was able to create and use a Bitmap:

Focusing on the probe-side Scan operator (Scan on #TLarge) i notice the following: 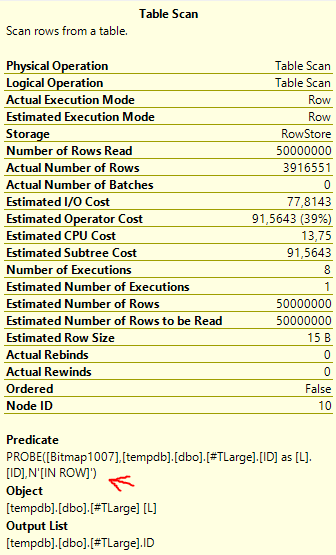 I wonder what happens if I add some indexes?

Times went down for both queries but for different reasons, the biggest improvement was made on the serial query, let’s see why:

The serial query made the big jump in performance because it switched to a Merge Join, which was able to stream the rows of both tables at the same time:

It was able to skip a bunch of rows at the end when it realized that there couldn’t be any more matching rows from the 1st table but that’s it.

The improvement on the parallel plan is sneakier, as the plan seems exactly the same at first, so how are we able to run even faster?
Let’s look at the same scan operator as before: 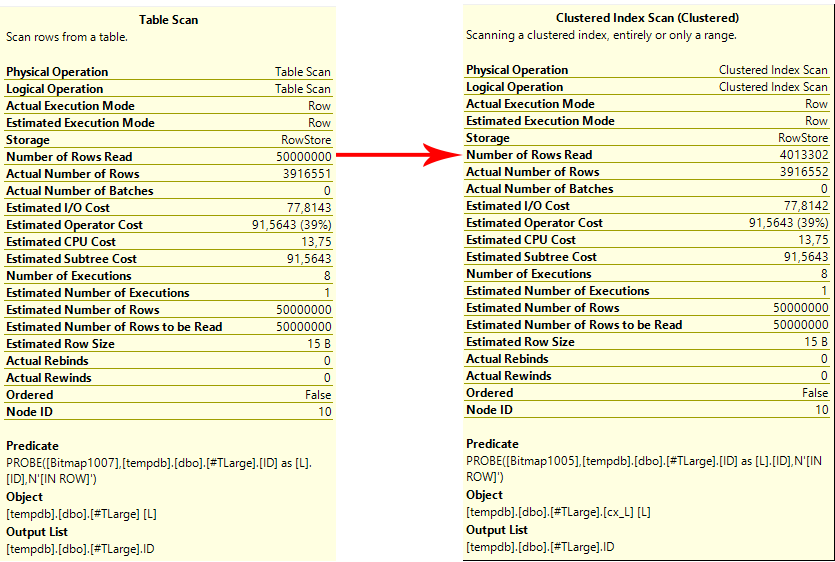 We still aren’t seeking, but we still haven’t read all the rows, it’s 🌈MAGIC, even better, the magic of predicate pushdowns: In this case having an index on the column allowed to apply the bitmap filter even before the streaming of each row from memory, filtering out the pages that wouldn’t have contained a possibly matching row.

After a brief pause of amazement, let’s ask ourselves: can executing this in batch mode be even faster‽
Let’s try with a batch mode trick:

in this way we’ll only trick the optimized into using the batch mode where it can in out plain rowstore indexes, we get an interesting picture from here:

BEHOLD the Adaptive Join operator! But of course in the end it chose the Hash Match join, because we already know that we had too may rows for an inner loop join, but for some reason the optimizer didn’t consider the information that it already had before, weird.
A bitmap is created regardless, but isn’t shown in the plan: it’s used a predicate for the filter operator. 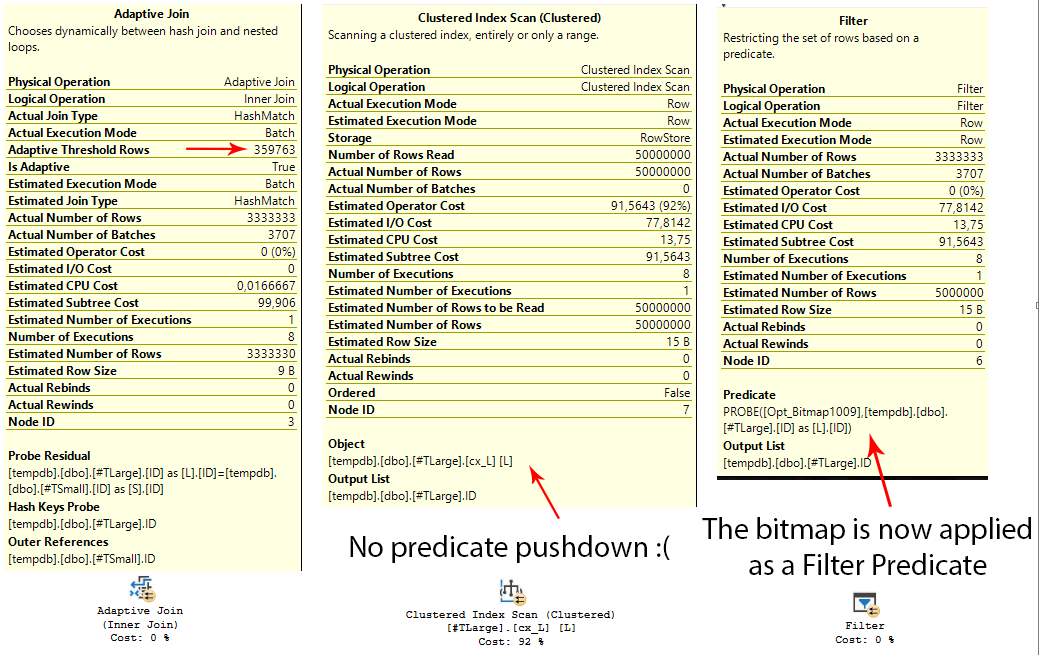 So, we switched to a batch mode join, which is super fast, but which is really only the residual probe of the Filter operator that was inserted in the new plan, and the scan needs to read all the rows in the table, regardless.
The timing is good, but it’s worse than the plain parallel plan, leaving us with a “meh”.

What if we put everything in Columnstore Indexes?

(MAXDOP 1) is basically useless since the query won’t even need to go parallel, the plans created are the same:

So simple, yet so powerful: Between compression and batch mode execution, the columstore approach smokes even the bitmap pushdown to row in rowstore indexes (and that’s because the index is both smaller in memory and can be scanned in batch mode) 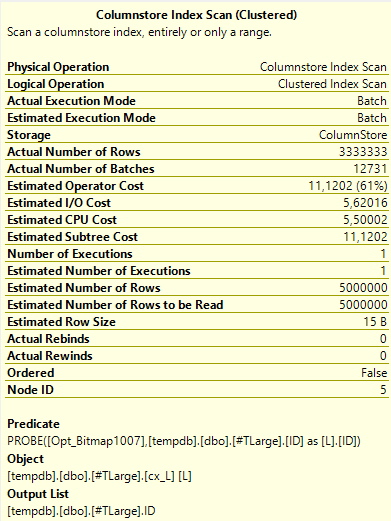 In this plan too, a bitmap is created and used as predicate for the scan operator, which of course runs in batch mode.
We aren’t even skipping segments, since the small table is a linear subset of the large one, so there are no gaps; In a situation where gaps exist, an even faster execution would occur for the columnstore index (while nothing would change for rowstore)
It seems that for these type of queries the columnstore technology can’t be beaten!

If you're interested in following me around in the social world, here are some URLs for you

This website uses cookies to improve your experience while you navigate through the website. Out of these, the cookies that are categorized as necessary are stored on your browser as they are essential for the working of basic functionalities of the website. We also use third-party cookies that help us analyze and understand how you use this website. These cookies will be stored in your browser only with your consent. You also have the option to opt-out of these cookies. But opting out of some of these cookies may affect your browsing experience.
Necessary Always Enabled
Necessary cookies are absolutely essential for the website to function properly. This category only includes cookies that ensures basic functionalities and security features of the website. These cookies do not store any personal information.
Non-necessary
Any cookies that may not be particularly necessary for the website to function and is used specifically to collect user personal data via analytics, ads, other embedded contents are termed as non-necessary cookies. It is mandatory to procure user consent prior to running these cookies on your website.
SAVE & ACCEPT